Force of Nature: How to Catch Rabbits and Other Beasts + Guide to Taming Animals

The rabbits are the first animals that you encounter in Force of Nature and they are all over the place. However, you’ve probably found out by now that they’re impossible to catch. This seems to be the case if you’re just starting to play the game, but I am here to share with you a guide on how to catch rabbits in the game, as well as a complete guide for more advanced players on how to finish off other wild animals like boars, foxes and so on.

And since we’re at the “Forces of Nature animals” chapter, we’re also going to talk about how to tame animals in the game and get a constant flow of eggs, milk, wool or feathers for your arrows. So these being said, let’s proceed with our guide!

How to Catch rabbits in Force of Nature

The good news is that rabbits can be killed as soon as you start playing the game. It sounds horrible, but their meat will keep you alive in the game, so one’s got to do what one’s got to do in order to survive on a hostile island. Here’s how to do it:

Get close to a rabbit and it will run away, scared. Continue to get close to them with the plan of sending them into a dead end: most of the time, when they will hit a bunch of bushes, they will get stuck. There, you can hit them with your weapon until they are no more. This takes a bit of time and it can prove frustrating, but it’s the only way to do it for a while (although, truth be told, you don’t really need to catch the bunnies as you will have enough resources anyway).

Important: Have in mind, while following the rabbits around, not to end up near a horde of goblins or other wild animals. Always keep your eyes open!

Later on, you will be able to easily kill rabbits after crafting a bow: as soon as you get the bow, you will need a few shots, but as you get better gear, one will be enough.

How to kill wild animals in Force of Nature

Most wild animals will run away when their health drops to a critical point and chasing them is usually impossible, especially since there are even higher chances in running into other big threats if you do so. But you still have some options when it comes to completely destroying them, which should be your main goal:

1. Do it like you do it with bunnies. Keep running after them until they get stuck in an area and apply the finishing hit. Be very careful about running into other enemies!

2. Finish the job with a bow. This is the easiest way to do it later on in the game, so make sure that you upgrade your bow and learn how to shoot it like a pro.

Also read: our tips and tricks article for FoN. A complete strategy guide that beginners will have a lot to learn from. 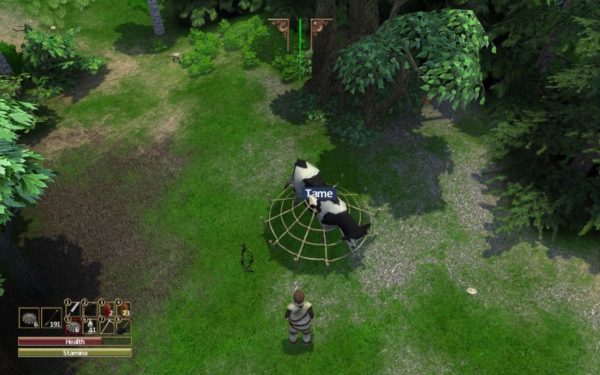 With some animals, you can also take the peaceful route and tame them. Currently in the game, you can tame Chicken, Roosters, Cows, Goats and Sheep. You can also tame Pigs, but they are useless at the moment of writing this guide (this doesn’t mean you shouldn’t tame one or two just in case they’ll start producing bacon later on in the game).

But how to tame animals? You need to craft traps on your Crafting table in order to get access to this feature. Have in mind that you will normally need at least 2 traps per animal you want to tame, so make sure that you have at least a few with you.

Once you have the traps, find the animal you want to tame. They are all equally difficult, so size doesn’t matter in this case (ahem!): it’s just as easy to catch and tame a cow in Force of Nature as it is to do the same with a chicken.

Once you find the animal, equip the traps (usually by pressing the corresponding number on your keyboard if you have them in the quick equip menu) and a green line will appear. Aim the green line to be directly over the animal you want to tame. It doesn’t have to be right at the top, the animal should be anywhere on the green line. Actually, the closer you can get to the animal, the better!

If you are really lucky, you will catch the animal with one shot, but that rarely happens. This means that normally, if you follow the steps above, you will throw the trap and catch the animal, but it will escape. When this happens, quickly run after it in a straight line and throw a second trap at them. This will have a 100% success rate.

You still have to move relatively quickly: get near the trap, hit the Space button and press the Tame bar – trapped animals won’t stay there for long and you could lose them if you are not fast.

With a little bit of practice, you will become a master when it comes to trapping animals in the game!

So these would be our guides for now, I hope that you found them useful. If you have other questions or want me to do some other guides on different areas or aspects in Force of Nature, don’t hesitate to let me know by commenting below.