After finding out everything about Sheriff Cartman in South Park: Phone Destroyer, it’s time to move on to a new card. This time, we’re talking about one of my favorites so far in the game: Storyteller Jimmy.

In today’s article we have a complete Storyteller Jimmy card review: a guide with everything you need to know about it, combo recommendations in order to increase its power and how to counter it in case it’s played against you.

So let’s get this started – there’s a lot of useful information to be shared here in our South Park Phone Destroyer Storyteller Jimmy card review! 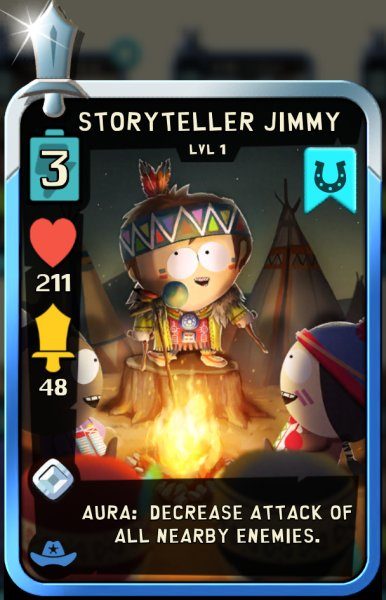 I really like his stats and I consider him an overpowered card so far, especially early on in the game because of his huge drain of attack power in his Aura.

Upgrading this card increases its stats, but the growth is relatively low compared to other cards. However, every little bit helps and as long as you can keep those Storyteller Jimmy coming for leveling him up, you should do it.

Here are the stats and coins costs for each level:

Even though his health is not as impressive as that of Sheriff Cartman or other tanks out there, he’s a real beast when sent into the heart of the battle, dealing with melee units because of his attack drain. This means that he (and nearby allies) lose less health, making opponents less useful. He’s really, really good if played at the right time – that is when your opponent has summoned a bunch of melee units.

How to counter Storyteller Jimmy

The best way to counter this card is by playing ranged units that cause a lot of damage well away from his Aura. A strong spell like the fireball can also help send him back into the deck.

Even though not really difficult to counter in theory, in practice I’ve had a great deal of success with Storyteller Jimmy. He’s an extremely valuable card that can help you a lot in battles, especially when played at the right time near melee units. I’d go as far as considering him overpowered and a real beast!

What do you think about Storyteller Jimmy, though? Is he one of your favorite cards in South Park: Phone Destroyer or not?