We’re continuing our epic trip through the awesome (and not so awesome) South Park: Phone Destroyer cards with Nathan. This is also one of my favorite ranged cards, at least for the early stages of the game when he can cause a ton of damage. But I also consider him good for later too, so definitely a good one to invest in.

In case you want to look at other card reviews that we’ve made, you can check out the Storyteller Jimmy review or Sheriff Cartman review – or simply use the search options to get more guides for this game.

With these in mind, let’s move on and let’s find out everything about the South Park Phone Destroyer Nathan card: stats, combos and how to counter it if its played against you by the opponent. 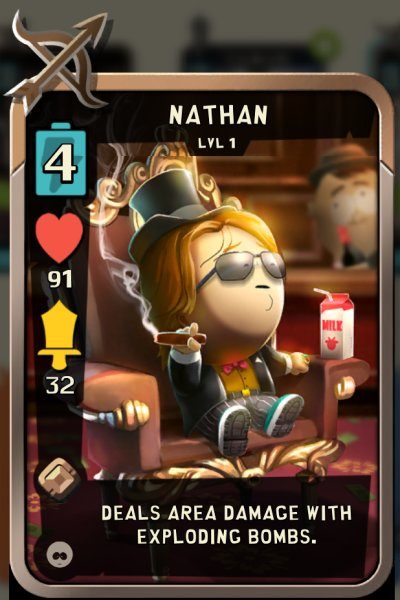 As you can see in the image above, his stats are really solid and they only go up from here.

He is a ranged unit causing AoE (area of effect) damage, meaning that his bomb causes damage to multiple enemies if they are close together. And they usually are if you play the right cards!

He is a bit slow when it comes to throwing the bomb and it’s pretty much useless once melee units get near him, but he has a solid range and can easily be protected for a long while, allowing him to wreak havoc until he goes to meet his maker.

You should always use him when his AoE blast gets the most damage done, and always play him behind a tank or two.

Play this card as far away from the heat of the battle as possible and always consider bringing in new faces up front in order to protect him.

Once a tank is into play, bringing it all the enemies close, Nathan will easily work his magic and destroy everything nearby. Great against swarms of units (like the rat pack) – but also good against single units packed together.

How to counter Nathan

If you want him gone faster, it’s usually a fireball that deals a lot of damage and takes him out, together with any other ranged units near him.

If you can get your units to him, assassins and attackers do a great job too. Tanks and especially the rat pack are not a great choice for quickly getting rid of him.

A really good card that, even though not difficult to counter – especially if you have a spell on your hand – can still cause a lot of damage and give headaches to any opponent. I personally consider this one of the better cards in the game, at least for the earlier stages – but I am also using it with great success still.

What do you think about South Park Phone Destroyer’s Nathan card? Let us know by commenting below!