Rebel Inc has just been launched by the creators of the insanely popular Plague Inc and we took the game for a spin and loved it. If you’re just starting though and you want to make sure that you know how to play Rebel Inc, we’ve got you covered! Our guide, which is aimed at beginner players, will help you get through the basics and become an expert player in no time.

Although you will see the resemblances between Plague Inc and the recently released Rebel Inc, things are definitely different and the level of depth in the game is a bit higher in my opinion. This also makes the game even more fun than the developer’s first title, which says a lot about its quality.

But we’re here to check out a beginners guide for the game and learn how to play Rebel Inc. So let’s just get started with that now!

Your goal in Rebel Inc is to get 100% Stability in the region you’re playing in, while making sure that your general Reputation is always above 0. In order to do that, you have to keep an eye on two important factors: the needs and demands of the local population, as well as the insurgent army which will do its best to stir things up and damage your reputation.

If you have played Plague Inc before, you will feel right at home in terms of gameplay and the basic concepts. You will start by selecting a Map you want to play on: 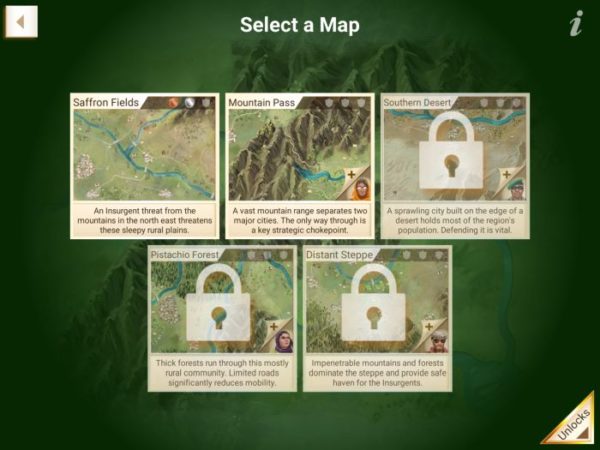 New maps are unlocked by completing the previous one on Normal difficulty (or Brutal). It’s recommended to always play a new map on the Casual difficulty in order to get accustomed to it and see how the rebels will play and which are the key areas to take care of.

After selecting the map, you will have to choose the Governor you’ll play as. Each governor has some specific bonuses or advantages, and you unlock more by completing the maps on either Normal or Brutal. The most difficult Governor to get is presumably the best one – The Warlord which requires you to complete all stages on Brutal.

Finally, after choosing your governor, you’re taken to the Difficulty selection screen, then you’re off to a new start: 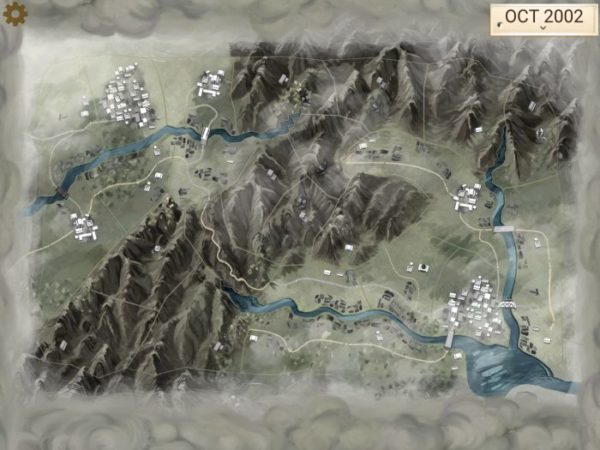 As you can see above, you will start with no knowledge of the area, and you will first have to set up your base of operations. The best idea here is to set up your starting point in an area that gives your opponent (the Insurgents) the least advantages.

In the case above, I usually like to start in the North-Western corner since it’s easy to defend and access to the opposite area is relatively easy. Each region has a best area to start in – make sure to try different placements until you find it. It’s also important to have in mind that your reputation suffers more damage if the enemy forces control large cities: 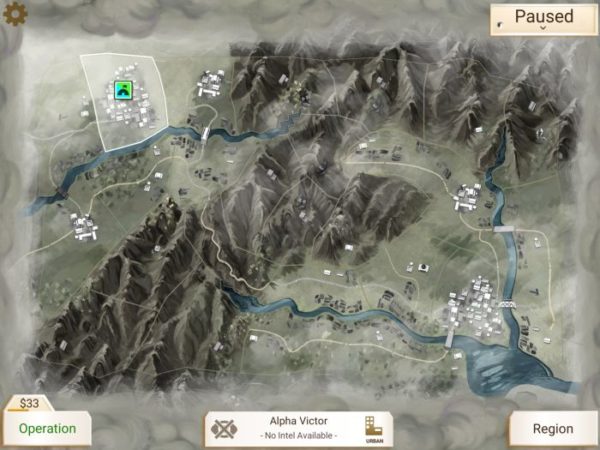 Now, after setting up your starting location, it is time to start unlocking some Operations using the option in the lower left corner. There are:

– Military (this is the main hub of your army, where you will mainly train units, but also work on other improvemets for your military): 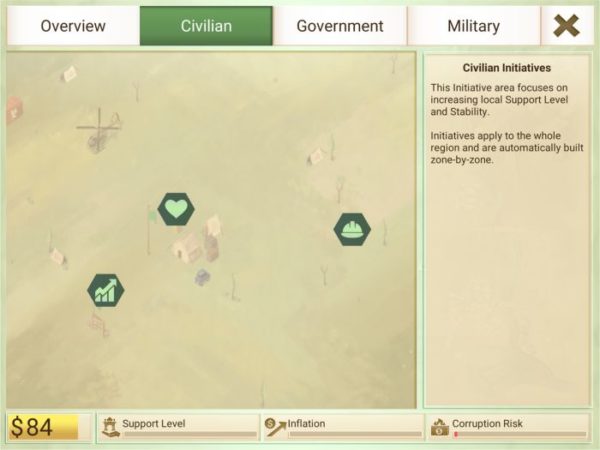 In my opinion, you should always start with working on a few Civilian initiatives, followed by some Government ones. Your main goal is to start working on gathering intel on all areas and doing so ASAP. Here’s my recommended starting point as soon as the game begins: 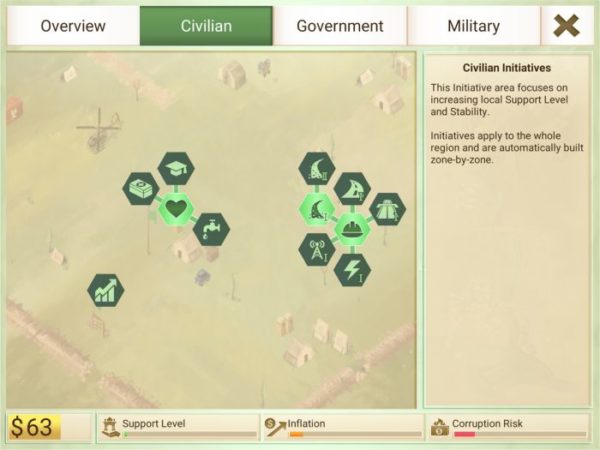 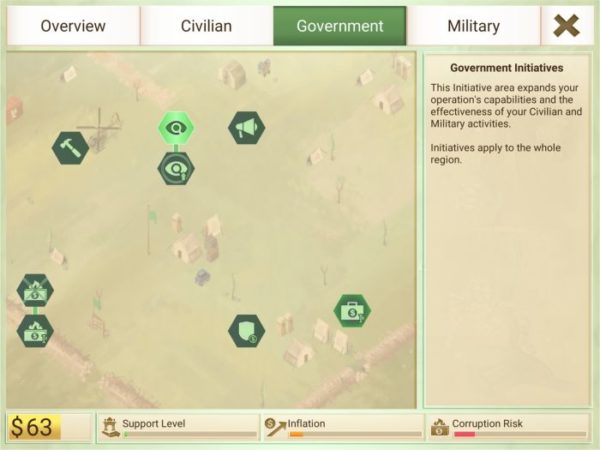 You will have to wait a few turns afterwards (a few months to pass – check them in the upper right corner) in order to keep inflation under control. Inflation grows fast if you make many purchases in a row and it decreases over time. When July hits, you can make a few more purchases: 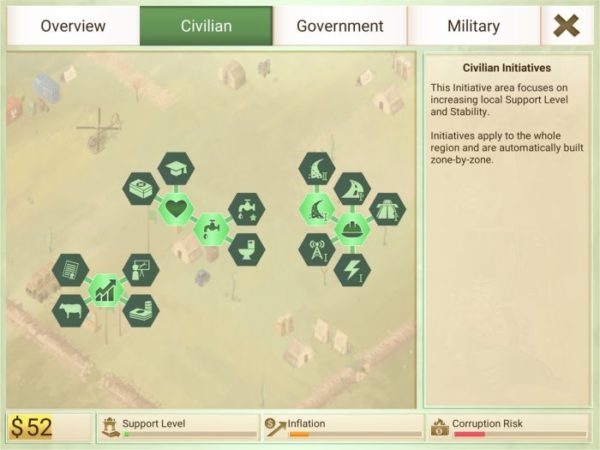 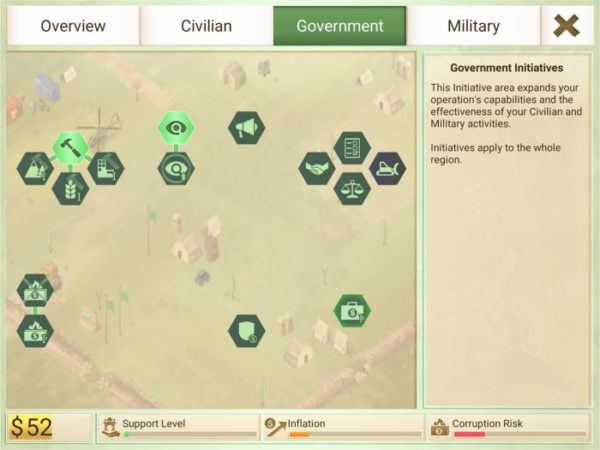 Your main focus now is to start delivering some goodies to the local population (mainly through the Services initiatives) and work on getting them done fast through the Outreach Office.

Wait a couple of months again to keep inflation under control and invest even more in Civilian initiatives. I recommend focusing on the Infrastructure, because you need the boosts offered by it, mainly to combat and intel. Combat will begin soon, so make sure you have enough money left to train your troops (a minimum of $8 to be on the safe side). You can check out the effect a new purchase would have on inflation or corruption before making the purchase.

As you can see in the image below, I bought Main Roads 1 and if I am to buy Highways 1 as well, the impact over inflation would be huge: 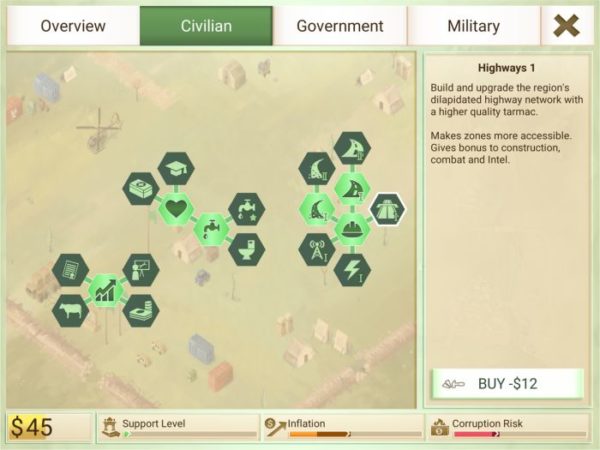 But switching to a different category (Government in this case) won’t affect inflation that much. Therefore, I recommend getting the first Anti Corruption option as it’s never too early to fight corruption which, if too high, reduces the support you get. 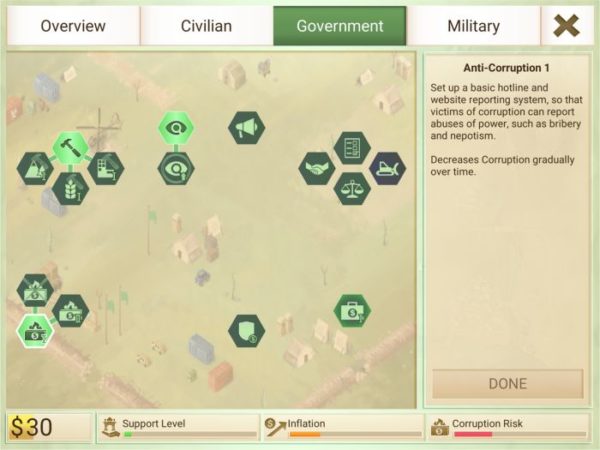 Now, even though it might not hurt to try and get some more Civilian operations or initiatives to make life easier, it’s probably best to wait for the message about the Insurgents attack that’s incoming. It will usually happen in the first quarter of the next year, although it seems to be related to the number of initiatives you have purchased.

So if you want to get a slight advantage and extra support, don’t rush investing in many operations just yet. Because eventually, you will get the message that an attack is imminent: 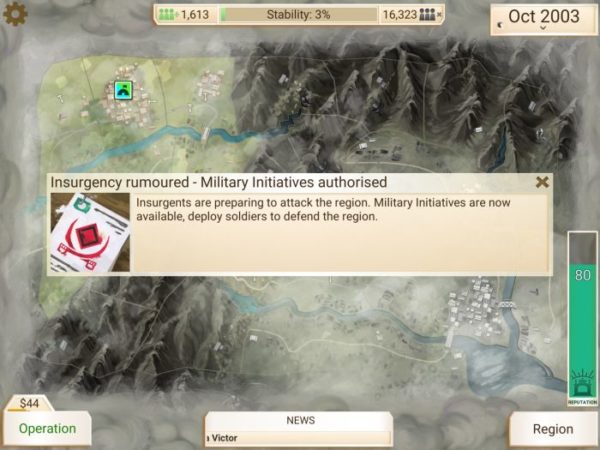 Now is the time to start training your military, because you should never let the rebels get out of hand: you have to constantly hunt them down and prevent them from achieving anything substantial.

This is when you should unlock the Local Militia initiative in the Government Ops if you haven’t done so and train your first military unit. I actually recommend buying the second (coalition) as soon as the first one’s ready, as it makes it easier for you to counter the Insurgents: 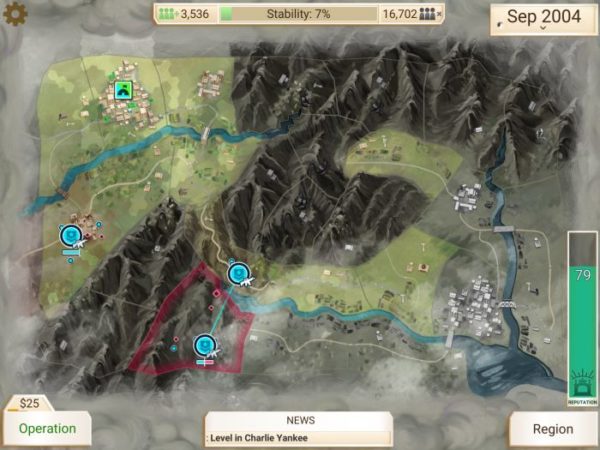 Dealing with the rebels is relatively easy, at least in concept: they will keep trying to attack and take over other provinces, and you have to keep fighting back. The idea here is to try and corner them: if they have no adjacent area to retreat to, they will be destroyed. Oterwise, they will keep retreating and you will have to keep attacking.

This is relatively annoying, but not much you can do. Even more, in some occasions, they will spawn in multiple regions, having a camp nearby. Do some damage control and take care of them one area at a time as you won’t be able to fight on two fronts. Focus on the areas that are closest to the most densely populated areas (cities and multiple buildings).

From now on, things get a bit repetitive, but you still have a ton of options to think about. Keep an eye on your Reputation levels and try to always have them as high as possible, because eventually you will start having to make choices in random events, choices that will eat up your reputation.

You have some Operations that increase your Reputation, so make sure to use those if you really have to. If not, try finding a balance between investing in Civilian initiatives and Government / Military ones. For the latter, it’s always a good idea to start training National Soldiers too – they are really slow to produce and weaker, but the Coalition ones will eventually be pulled (or you’ll have to pay a lot of reputation to keep them).

Take things slow and don’t try to rush things: every game will have you go through a really tough moment when everything seems a bit difficult, but keep training soldiers and improve your operations, and you will succeed. 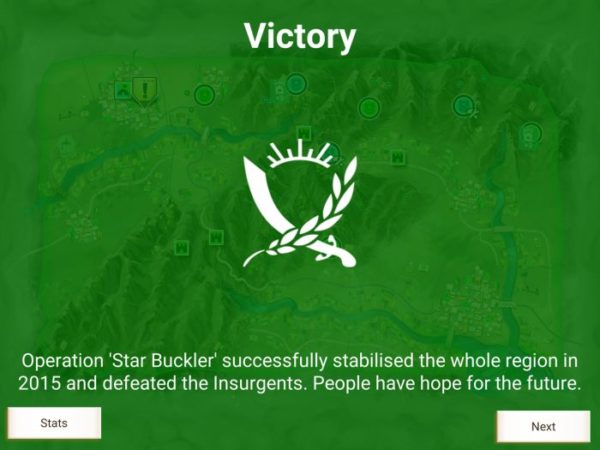 This would be all that you need to know for a great start in Rebel Inc. There are some more advanced tactics and techniques that have to be considered if you want to beat the higher difficulty levels, but at least you now have the basics and you can easily take it forward from there to victory.

How to Download and Play Rebel Inc for PC